Safer and riskier times of the month 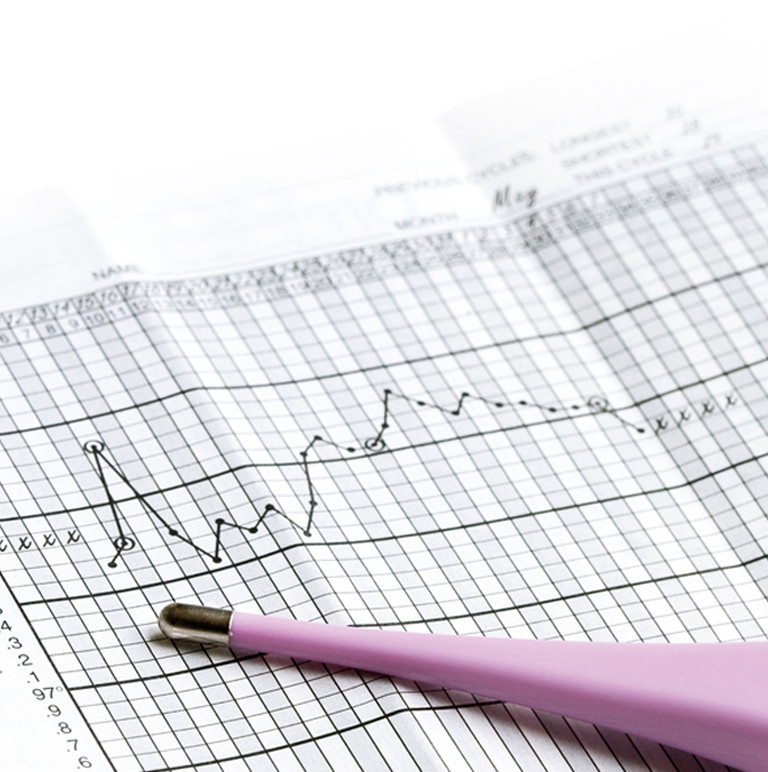 Fertility awareness (natural family planning) is a way of predicting ovulation, to work out when pregnancy is more likely

The method involves recording signs of fertility such as body temperature, thickness of fluid in the vagina, and calculating fertile times from menstrual cycle dates.

Teaching from a qualified fertility awareness teacher is recommended.

Fertility awareness can be very effective (with daily monitoring)

Fertility awareness apps indicate likely fertile times. There are hundreds of apps for monitoring periods, but most apps are unregulated.

To rely on fertility awareness, itis important to record two or more signs of fertility. For example, the Natural Cycles app records morning temperature as well as period dates. There has not yet been enough research to know how reliable this app is at preventing pregnancy.

Apps which only record period dates arte not reliable enough to be used for contraception (21% accuracy). This is because the time of ovulation can vary from month to month, and from person to person, depending on biological and lifestyle factors. To estimate the time of ovulation with accuracy, an app must have as much evidence as possible about the app user's period dates and other signs of fertility.

Apps are a really good way to learn more about your body and the menstrual cycle, but for pregnancy prevention, it is necessary to use one which records period dates and at least one more sign of fertility, such as temperature or vaginal fluid.

It is a good idea to discuss apps that you use for contraception with your doctor.

Which other methods are hormone-free?

If you're keen to avoid hormones, contraception methods like the copper coil or diaphgram might suit you.

What's right for you?

How much effort is Fertility Awareness?

Monitoring involves recording body temperature first thing in the morning, feeling the thickness of fluid in the vagina, and recording the pattern of periods, to work out when it is likely that an egg will be released (ovulation). Fertility awareness is more effective when two or more of these signs of fertility are monitored.

You need to record patterns for at least three months before starting to rely on predicting the fertile days. If periods are irregular, or if you have recently stopped using a hormonal method of contraception, it takes longer to be able to predict fertile times accurately.

Fertility awareness does not work if hormones are taken at the same time, because the hormones will alter all of the signs of fertility.

There are fertility charts and mobile phone apps that can help track the changes and to predict fertile days.

How effective is Fertility Awareness?

Fertility awareness is generally not as effective as hormonal or long-acting methods of contraception.

It takes commitment to use the method effectively, but it is a reliable method when used with attention to detail. However, allowing for the ups and downs of life, the method is around 76% effective, meaning that if 100 people used fertility awareness for a year, around 24 would become pregnant.

How does it work?

Fertility awareness works by calculating when it's safer to have sex (when pregnancy is unlikely), and when to avoid penetrative sex or use another method (like condoms).

What's right for you?

How effective is it?

How can I have lighter periods?

Most hormonal contraception is very good at making periods lighter.

The body's hormones naturally go up and down. The hormonal methods of contraception work by levelling the ups and downs, and by stopping an egg being released (ovulation). The hormones in contraception are very similar to the body's natural hormones, but the levels are steady instead of up and down. The steady level of hormones usually means that period bleeding is lighter, and also less painful.

The implant, pills, patches, and the ring are all ‘low dose’ methods. The lowest hormone level of all the methods is the IUS (hormonal coil) which is released into the womb slowly over 5 years.

Can I control when I have a period?

There’s no need to have a period every month – on the pill, patch or ring it’s easy to control when a period comes, by taking the method continuously without a break. A period will come when you stop the method (for a week).

You can decide when a bleed will happen, and can also take the pill, patch or ring continuously to temporarily stop your periods.

It’s safe to use two or three pill packets back to back to delay a period, going straight from one packet on to the next with no break (or changing the patch once a week with no break, or using the vaginal ring continuously).

The Combined Pill, The Patch and The Vaginal Ring are best for controlling when periods come, since these contain the hormone oestrogen.

How can I stop my periods?

Hormonal contraception makes it possible to have no periods at all.

Some methods are quite likely to stop periods so there is no bleeding at all, or only occasional light bleeding. The best method to stop periods is the Injection. Almost half of users (47%) will have no periods after a year of using the injection. The implant can also cause a pause in periods – periods will stop for about one in five users, and more than half have bleeding which is light and less frequent. Implant.

Periods can be delayed by using the The Combined Pill, The Patch or The Vaginal Ring continuously. So for example you can choose to have a period once every three months only.

It is safe, and there is no harm to future fertility in having a break from periods. When there is no period, the lining of the womb stays thin - blood doesn’t build up inside the body. There are some benefits to stopping periods - less bleeding helps to save iron (many people are anaemic because of their periods). Once the contraception is stopped, the body returns to it's normal cycle. Periods.

Having no periods on contraception is a temporary effect which is completely reversible, and makes no difference to future fertility - having no bleeding does not affect the chance of getting pregnant in future. All of the methods are very quickly reversible (except the injection - it can take a few months to get periods back again).

Which methods can make breasts bigger?

The Combined Pill, The Patch or The Vaginal Ring can make breasts bigger, since these contain the hormone oestrogen.

How can I treat Premenstrual Syndrome?

Premenstrual Syndrome is shortened to PMS. It's also known as PMT (premenstrual tension).

The body's hormones naturally go up and down. There’s a lot more progesterone in the week before a period, and that can cause pre-menstrual symptoms like bad moods and hunger. Hormonal contraception works by levelling out hormones, and so can be ideal for reducing PMS/PMT.

These methods can help with PMS:

Which methods are the easiest to keep secret?

The injection is the most invisible – there might be a tiny plaster put over the injection place (usually on the bum), but that’s all.

Coils are put into the womb, so cannot be seen. Occasionally a partner can feel the thin string of a coil during sex, and if this happens, it can be cut short so they don't feel it.

How can I have less period pain?

Hormonal contraception works by levelling the normal ups and downs of the body's hormones, and by stopping an egg being released (ovulation). This keeps the lining of the womb thin which reduces the pain when it comes away (a period).

Which methods are best at preventing pregnancy?

Nearly half of all pregnancies are unplanned (45%) – but that doesn’t necessarily mean that they are unwanted.

What if I’m breastfeeding?

Do I need contraception if I’m breastfeeding?

Breastfeeding can help to delay when you start ovulating and having periods again after giving birth.

Breastfeeding can help to prevent pregnancy on three conditions:

Breast feeding can be 98% effective in preventing pregnancy if all three conditions apply. But the risk of pregnancy becomes higher:

Once your baby is more than 6 months old, you will need to use another contraceptive method even if you are fully breastfeeding and haven’t had a period.

Which methods are safe if I’m breastfeeding?

The contraceptive implant, injection, progestogen-only pill, IUD, IUS and condoms are safe if you are breastfeeding. If you're using a hormonal method of contraception, a very small amount of hormone will enter the milk, but this has not been shown to be harmful to breastfed babies.

Which methods are not suitable?

The combined pill, contraceptive patch and vaginal ring may make it harder for your milk to come in (because they contain the hormone oestrogen).  So if you’re breastfeeding, it’s best to wait until your baby is six weeks old before starting one of these methods.

Contraception after having a baby

Many unplanned pregnancies happen soon after having a baby.

How soon is it possible to get pregnant again?

You can get pregnant as soon as 21 days after having a baby. It is possible to get pregnant before you have your first period and if you’re breastfeeding.

Which methods can be started immediately after having a baby?

The contraceptive implant, injection, progestogen-only pill and condoms can be started immediately after having a baby.

The IUD and IUS (coils) can be fitted at the time of a caesarean section or immediately after a vaginal birth. If they are not fitted within the first 48 hours, fitting should be at least four weeks after giving birth.

Which methods are not suitable after having a baby?

The combined pill, contraceptive patch and vaginal ring should not be used in the first 3 weeks after having a baby. This is because the risk of blood clots is higher after giving birth. Those who have had uncomplicated births, with no risk factors for blood clots and who are not breastfeeding may be able to start as early as 21 days following birth. However, if you are at increased risk of blood clots, you may be advised to wait 6 weeks before starting one of these methods. Speak to your doctor or nurse who can advise you.

The diaphragm is not recommended in the first 6 weeks because the cervix (neck of the womb) and vagina change shape and size during pregnancy and birth.  These changes make the diaphragm less good at preventing pregnancy.

How long should I wait before getting pregnant again after having a baby?

The advice is to ideally wait for 24 months, or at least 12 months, before becoming pregnant again. This is because if you get pregnant again quickly, the next baby might be too small, or be born too soon.

Leaflet: Contraception after having your baby

What's right for me?

Not sure which type of contraception is right for you? Find out your top three methods.